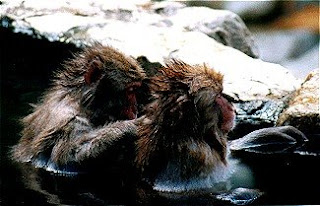 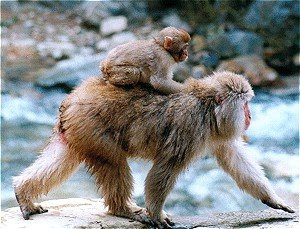 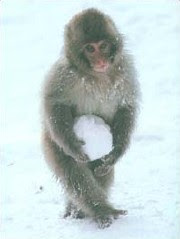 Many of us are familiar with images of monkeys soaking up the watery warmth of a hot spring in the midst of a bone chilling, wintery landscape. These are the Snow Monkeys, or Japanese macaques of Japan, living at latitudes of 41° to 31° north of the equator, the only monkeys to live that far north in the world.

The Japanese macaque lives throughout Japan, with a range covering subtropical lowlands to sub alpine regions. The great differences in habitats have made it necessary for the macaques to adapt to large seasonal changes. In the central and northern areas of Japan the temperatures can range from 5° F (-15° C) and snow more than 1 meter deep in the winter, to 73.4° F (23° C) in the summer.

Although they can be found in forested hills, highlands and mountains, there are four different areas in Japan that the Japanese macaques are located. Their northern limit is on the Shimokita Peninsula in the northwest part of Honshu Island. Conifers and deciduous trees are the dominant vegetation here. In the central region of Japan the monkeys can be found in the Nagano Mountains near a number of natural hot springs heated by the Shiga Kogen volcano. The third area is on the seaside of the island of Oshima, just off the Hanto Peninsula. In these northern areas they experience both winter and summer seasons and the macaques will travel to different home regions in the different seasons. The southern most limit of their habitat is on the southern island of Yaku-Shima. Subtropical and temperate plants and broad-leaved evergreen forest can be found here. More macaques are found here than anywhere else in Japan.

The Japanese macaque has a very human-like, naked, red face, and expressive eyes. It is a medium sized, stocky monkey, about 2 to 4 feet long, and weighs from 22 to 66 pounds. It has a relatively short tail, less than a quarter of the head and body length. The males are on the average much larger than the females, which is something called "sexual dimorphism". It has a thick, furry coat ranging from gray to brown or mottled in color. In the winter the northern tribes of macaques will grow a heavy insulating coat to maintain their body temperature. During the summer they will have a lighter coat. Like most monkeys, the Japanese macaques have a fully opposable thumb. They use all four legs to get around, but will also walk just on their hind legs when they're holding something with both hands. It has large cheek pouches for storing food in when it forages.

A troop of macaques consists of about 20 to 30 individuals, and is usually led by a dominant male who decides where the group goes and defends it against intruders. Two or three male sub-leaders help him out by keeping order in the group. Troops will have several males and females in it. Rank among males in the troop is very stable and has to do with the age of the males. High-ranking males tend to be more sociable than lower ranking males, who live on the outskirts of the troop. Males will leave the troop they were born into when they reach sexual maturity, and travel between different troops throughout their lives. The troop will spend its days foraging for food and sunning themselves. Young macaques spend a lot of time playing. In the winter they will sleep in deciduous trees to prevent accumulated snow from falling on top of them.

There is a strong social bond between the members of a troop, especially among the females. Females remain in the same troop, usually their entire life. There is a strict dominance hierarchy in both males and females. The offspring of high-ranking females will often inherit their mother's rank as they get older, with daughters gaining the same rank as their mothers. Interestingly, an alpha male will sometimes gain his rank because his mother was a high-ranking female. Younger offspring are ranked higher than older siblings, so it doesn't pay to be the first-born of a high-ranking mother. Macaques are very sociable, and will groom each other and share the job of raising their young.

Females become sexually mature at around 3.5 years, and males at 4.5 years of age. Both males and females have many partners in a breeding season, but interestingly enough, it's the female who picks who she wants to mate with. She tends to make her selection according to the rank of the male and how long he has been in the troop. She avoids choosing males whom she has mated with in the past 4-5 years, thereby avoiding inbreeding.

Macaques throughout Japan have a peak birth period from April through July, and May through September. A female is pregnant for about 5 to 6 months. She will spend less time grooming, moving and foraging, and more time resting on the day of the birth. She will have one baby at a time, forming a strong mother-infant bond that lasts for a lifetime. The infant depends on its mother for a very long time, not being weaned until well into its second year, which is very stressful for the mother. Older siblings will still be dependent on their mother while she nurses the infant, learning what to eat, where to sleep and how to raise infants from her.

The Japanese macaque are omnivorous, but primarily frugivorous. Their diet consists mainly of fruits, seeds, young leaves and flowers, insects, and tree bark. The variety in their diet is mostly due to the seasonal changes and their large habitat range. In the spring and summer, young leaves, flowers and shoots are eaten. In the fall they eat mostly fruit. Their winter diet consists mainly of buds and bark. They will also eat crabs, and bird eggs. Most of their foraging is done on the ground.

Scientists have begun to rethink their ideas on culture within monkey society in a large part because of the Japanese macaques. It has been observed that the macaques invent new behaviors and pass them on by immitation. In 1963 a young female named Mukubili waded into a hot spring in the Nagano Mountains to retrieve some soybeans that had been thrown in by the keepers. She liked the warmth and soon other young monkeys joined her. At first the behavior caught on only with the young macaques and their mothers. Over the years the rest of the troop took up the behavior, which now finds shelter in the 109° F (43° C) hot springs to escape the winter cold. Young monkeys have also learned how to roll snowballs, which doesn't have any survival purpose, but with which they have a lot of fun, much like human children.


Potato washing by a troop in Koshima was first started by a one and a half year old female named Imo. Researchers would put sweet potatoes along the beach to bring the monkeys out in the open. Imo found that she could get the sand off the potato better by dipping it into the river water, rather than brushing it off with her hands, like the other monkeys were doing. Her brothers and sisters imitated her first and then their mother. Over time the entire troop took to washing sand off potatoes with river water. At first they simply washed the sand off, but Imo soon found that the potatoes tasted better if seasoned with salt water from the ocean. They began to bite into the potato then dip it into the sea water to season it and bite again. Imo was a bit of a genius for a monkey because she also discovered wheat washing. She would make a ball of wheat and sand and throw it into the water. The wheat would float up to the top where she could pick it up and eat it without the sand.

The main cause for the decline of the Japanese macaque population is the destruction of their habitat. This forces the adaptable monkey to find its food outside of its habitat where it can. An estimated 5,000 macaques are killed each year, despite being a protected species, because they raid nearby farms for food and thereby destroy the farmer's crops. Troops of macaques have invaded villages and terrorized its inhabitants by chasing after them and snatching food from children's hands. It was decided to build the Nagano macaques their own hot springs when they began to invade nearby hot tubs and human spas. Creating feeding stations in an efforts to save the macaques and prevent them from raiding nearby farms, has backfired to a certain extent, as the macaque populations in those areas have artificially soared.

The Japanese macaque, or Nihon zaru (Japanese monkey) have a long history in Japanese arts and history. The Japanese are very fond of their monkeys and do everything within their power to keep them wild and save them from extinction. 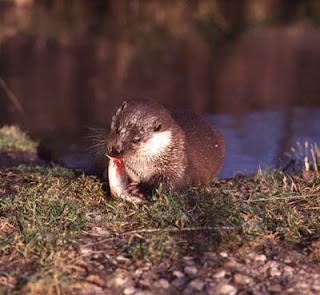 Description: The length is about 80cm,the weight is about 5-11kg. The body color is dark brown and between the throat and abdomen is white. The hands and feet which are short and are webbed. The body form is streamlined. The head which is flat has small ears. The mustache is very thick and it has a long and big tail.

Habitat: They live between rivers and the seashore and dig the hole there. This animal is nocturnal, and it is resting in the roost, and acts alone fundamentally from the evening to early morning, and food is taken in a river or sea daytime.

Population(before and now): Although there was capture of 1000 or more animal, before, 8-20 animals live now.

Reasons for its decline in population: Water pollution by agricultural chemicals, chemical cleaner, waste water from a factories. It make the food protect quantity drop. Until 1960's there was a lot of hunting.

Efforts to save this animal: People of Susaki city, Kochi are protecting Japanese river otters. People of a Shinjokawa valley protect and breed Japanese river otter and the "group which protects the nature and the otter Shinjokawa" were launched. This animal and many other endangered animals were protected in 2000 by the "The law about endangered animals and plans protection".