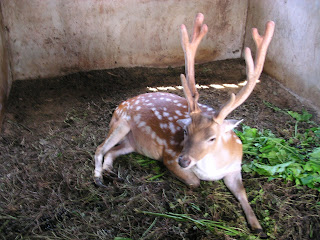 The Sika Deer (Cervus nippon) is a member of the deer family Cervidae that inhabits much of East Asia. It is found in mixed deciduous forests to the north, and mixed subtropical deciduous and evergreen forests to the south. The Sika Deer are closely related to Red Deer, Central Asian Red Deer and elk.

Sika deer are found from the Ussuri region of Siberia south to Korea, Manchuria and Northern and Southern China, with a possibly isolated population in Vietnam. It is also native to Taiwan and Japan and were possibly introduced to some smaller western Pacific islands. The largest race of Sika deer (found in the colder north) are Dybowski's Sika Deer (C. n. dybowskii) of Manchuria and Ussuri Region, and the Hokkaidō Sika Deer (C. n. yesoensis) of Hokkaidō Island in Japan. The Kerama Sika Deer (C. n. keramae) of the Ryukyu Islands is one of the smallest, and unlike other subspecies, has the whole body (including the rump patch) dark brown. The Formosan Sika Deer (C. n. taioanus) is rather large for an island form being larger than the Kerama Sika Deer and similar in size to deer from Southern China. There are several geographically separated subspecies, but due to the long history of the velvet antler trade (for medicinal values) and farming of Sika deer for antler productio!
n in much of Turkestan, China, Mongolia, Manchuria, and the Ussuri Region, the integrity of these subspecies is questionable as many populations have already mixed gene pools. Other deer raised for antler trade were Thorold's Deer (Cervus albirostris), various Central Asian Red Deer (Cervus affinis) subspecies, and Wapiti (Cervus canadensis) subspecies. Sika deer are known to escape deer farms and many of the so-called wild sika deer populations in Central and Southern China are descendants of those that have escaped and have re-established themselves in the wild. In Taiwan, both Formosan Sika Deer and Formosan Sambar Deer (Cervus unicolor swinhoei) have been farmed for velvet antlers. The only exceptions that may have integrity as a subspecies are possibly the Dybowski's Sika deer of Manchuria and Ussuri region, and the sika deer subspecies that survive in Japan, Ryukyu Islands, and Taiwan. Japan is the only country in Eastern Asia where sika deer were not farmed for velve!
t antler.
Dybowski's Sika Deer (C. n. dybowskii)
Tame deer wandering the streets of Miyajima, Japan

Sika Deer are widespread in Japan, and readily become tame; at one time they were regarded as sacred. The largest wild populations are in the northern island of Hokkaidō. Following Japanese settlement of Hokkaidō in the latter half of the 19th century, the deer there were hunted almost to the point of extinction, and were reduced to a few small populations. Legal protection put in place in the mid 20th century was followed by rapid population recovery from the 1950s to the 1980s. In the absence of the natural predators (wolves, now extinct in Japan), some hunting is now encouraged in order to stabilize the population and limit the agricultural damage done by the deer. The present Hokkaidō deer population is still concentrated in the eastern half of the island, and many deer that frequent other parts of the island migrate back to this area during the winter months.

Deer are also present in the more populated islands of Japan: for example, in the ancient capital city of Nara, as well as the sacred island of Miyajima, they wander at will among the temples, and are much photographed (and fed) by tourists. In other parts of Asia, the deer have also been extensively hunted, and legal protection has been less effective, so that several populations and subspecies are now endangered.
Formosan Sika Deer (Cervus nippon taioanus)

Sika Deer have been introduced into a number of other countries including Australia, Austria, Denmark, Germany, Britain, France, Ireland, Jolo Island (south of the Philippines), New Zealand, Poland, Morocco and the United States (Maryland and Texas). In many cases they were originally introduced as ornamental animals in parkland, but have established themselves in the wild.

In Britain and Ireland several distinct wild and feral populations now exist. Some of these are in isolated areas, for example on the island of Lundy, but others are contiguous with populations of the native Red Deer. Since the two species sometimes hybridise, there is a serious conservation concern.

Across its original range, and more intensively in many countries to which it has been introduced, the sika is regarded as a particularly prized and elusive sportsman's quarry. In Britain, Ireland and mainland Europe it has been noted that sika display very different survival strategies and escape tactics from the indigenous deer. They have a marked tendency to use camouflage and concealment in circumstances when Red deer, for example, would flee; and have been seen to squat and lie belly-flat when danger threatens in the form of human intrusion. Hunters and control cullers have estimated that the sika's wariness and "cleverness" makes it three or four times more difficult to bring to bag than a Red or Fallow deer. It has also been widely remarked that sika are much more tenacious of life, and harder to kill with a rifle bullet, than the native deer of Europe and North America. In the British Isles sika are widely regarded as a very serious threat to new and established wood!
lands, and public and private forestry bodies adopt policies of rigorous year-round culling, generally with little effect.

Among aficionados of venison, sika flesh is regarded as one of the very finest and most flavourful of all game meats at the dinner table.

The Sitka Deer is a subspecies of Black-Tailed Deer and Mule Deer and therefore, a different species.