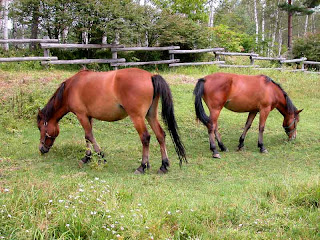 The Kiso horse has inhabited Japan for about one thousand years and has in the past been an indispensable aid for farm use, transportation, and power. Exact origin of the Kiso and other ancient horse breeds of Japan is uncertain. They are believed to be descended from either the plateau horses of Central Asia or the Mongolian horses of the grasslands.

Japan uses horses for military purposes as well as in agriculture and transportation. In the twelfth century, the warrior Yashinaka Kiso reportedly had 10,000 horse soldiers. In the Edo era (1600-1867) there was again emphasis on military use. Kiso canyon belonged to the Owari feudal clan. Records from this time regarding the ancient types have been a valuable aid to modern horse breeders. The government of the Kiso area considered the Kiso horse a strategic material, and produced many; numbers again reaching more than 10,000.

During the Meiji period (1868-1903), Japan fought against several foreign countries. Because Japanese horses are generally small in size, the authorities discouraged breeding purebred Kiso and encouraged a crossbreeding program between the Kiso and larger western horses. During the period surrounding World War II a government program was administered for the purpose of castrating purebred Kiso males. Consequently, almost all Kiso stallions were castrated. The Kiso was effected more dramatically by this administration plan because the breed had traditionally been considered a good military horse. Other Japanese horses were primarily used for agricultural purposes.

The existence of the Kiso breed is mainly due to a single horse kept as a holy horse at a Shinto shrine and therefore had not been castrated. The horse, named Shinmei, and another Kiso mare named Kayama gave birth to Dai-san Haruyama in 1951. This horse became the last of the pure Kiso. The present Kiso breed is a back-bred breed among the descendants of Dai-san Haruyama and other Kiso descendants. There are some ranches in Japan which specialize in Kiso or other Japanese horses.

The Kiso horse has a temperament quite similar to the Tarpan. They have been described as being similar in appearance to the Przewalski or the Mongolian horse. Some Kiso have dorsal stripe, which is one criteria for measuring the pureness of the horse as a Kiso.