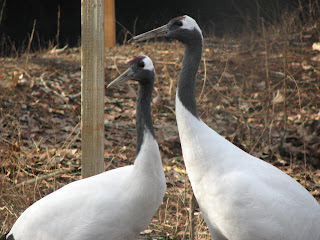 The Red-crowned Crane (Grus japonensis), also called the Japanese Crane or Manchurian Crane, is a large crane and is the second rarest crane in the world. (simplified Chinese: 丹顶鹤; traditional Chinese: 丹頂鶴; Hanyu Pinyin: Dāndǐng Hè; Japanese: 丹頂 or タンチョウ, tancho; the Chinese character '丹' means 'red', '頂/顶' means 'crown' and '鶴/鹤' means 'crane'). In East Asia, it is known as a symbol of luck, longevity and fidelity. At 140 cm (55 inches) high, the crane does not make easy prey, for all that it stands out in its natural habitat of marshes and swamps. When it matures, the Red-crowned Crane is snow white with a patch of red skin on its head. This patch of skin becomes bright red when the crane becomes angry or excited. This species is the heaviest crane, typically 7.7-10 kg (17-22 lb)[1], although large Sarus Cranes are taller.[2] The maximum weight a male Red-crowned Crane is known to attain would be 15 kg (33 lbs.)[3]
Closeup of the crane's head
In the spring and summer, the Red-crowned Crane breeds in Siberia and occasionally in northeastern Mongolia (i.e., Mongol Daguur Strictly Protected Area). Normally the crane lays 2 eggs, with only one surviving. Later, in the fall, it migrates in flocks to Korea, Japan, China, Taiwan, and other countries in East Asia to spend the winter. All Red-crowned Cranes migrate, except for a flock that is resident in Hokkaidō.
The crane eats small amphibians, aquatic invertebrates, insects, and plants that grow in marshes and swamps.
The habitat used is marshes, riverbanks, rice fields, and other wet areas.
The estimated population of the species is only 1,500 in the wild[4], with about 1,000 in China, making it one of the most endangered species of bird. Nearly all of the Chinese population lives in the Yancheng Coastal Wetlands.
The National Aviary in Pittsburgh, Pennsylvania ran a program where U.S. zoos donated eggs which were flown to Russia and raised in the Khinganski Nature Reserve and released into the wild. This program sent 150 eggs between 1995-2005. The program has been put on hold in order to concentrate on different crane conservation programs in Russia, such as education and fire suppression.(Red-crowned Crane SSP)
In Japan, this crane, known as tancho（丹頂, origins in China), is said to live 1000 years. A pair of Red-crowned Cranes were used in the design for the D series of the 1000 yen note. In the Ainu language, the Red-crowned Crane is known as sarurun kamui or marsh kamui.
In China, the Red-crowned Crane is often featured in myths and legends. In Taoism, the Red-crowned Crane is a symbol of longevity and immortality. In art and literature, immortals are often depicted riding on cranes. A mortal who attains immortality is similarly carried off by a crane. Reflecting this association, Red-crowned Cranes are called xian he, or fairy crane. The Red-crowned Crane is also a symbol of nobility. Depictions of the crane have been found in Shang Dynasty tombs and Zhou Dynasty ceremonial bronzeware. A common theme in later Chinese art is the reclusive scholar who cultivates bamboo and keeps cranes.
Because of its importance in Chinese culture, the Red-crowned Crane was selected by the National Forestry Bureau of the People's Republic of China as its only candidate for the national animal of China. But this decision was deterred because the Red-crowned Crane's Latin name show that is "Japanese Crane".[5]
By Unknown - January 26, 2009