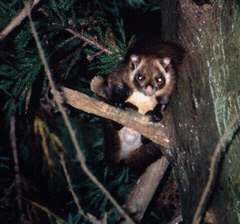 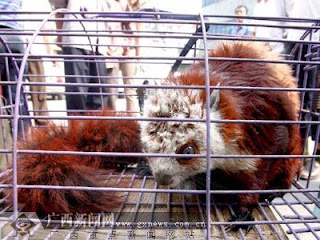 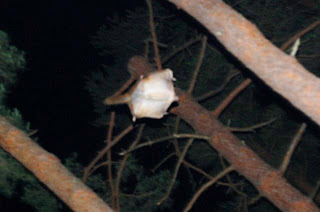 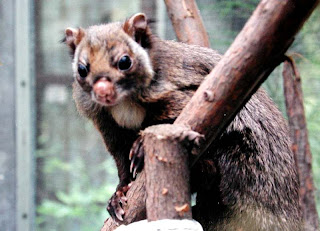 The Japanese giant flying squirrel (Petaurista leucogenys, Japanese: ムササビ: musasabi) is a type of flying squirrel. Like other flying squirrels it has a web of skin between its legs which it uses to glide between trees. Glides of 160 meters have been recorded. The tail is used for stability during flight. The body is about 25–50cm long, and the tail a further 30–40cm. It weighs between 700 and 1500g. It is much larger than the related Japanese dwarf flying squirrel which does not exceed 220g.

The squirrel is endemic to the islands of Honshū, Kyūshū and Shikoku in Japan. It eats fruit and nuts and lives in holes in large trees. The female has a home range of about a hectare and the male about two hectares.

Sexual maturity is reached after about two years. From winter to early summer the males compete for females. During mating, after ejaculation, the male produces a sticky protein called a coitus plug from his penis which becomes firm and blocks the female's vagina. This may stop semen from leaking out and heighten the chances of fertilization. It also prevents other males from mating with the same female. However males can use their penis to remove the coitus plug. Gestation lasts about 75 days and one or two young are born in early autumn.