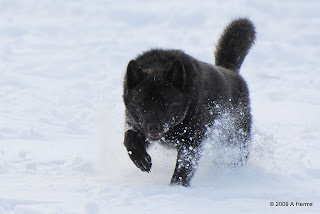 Origin The Kai Ken originated in the Kai district, now known as the Yaminashi Prefecture in Japan. The Kai is also known as the Tora Inu meaning Tiger dog in Japanese because of its brindle coloring.Little is known here in the United States about the Kai's history but it is thought in Japan that the Kai's ancestors may have lived in Southeast Asia some 4000 years ago. It is believed that the Kai was originally wild and was domesticated in order to help the" Matagi" or ancient Japanese hunters.They believe the Kai Ken is a natural born hunter. Purpose The Kai Ken has been primarily used in Japan for hunting wild boar and deer in the steep mountains. The Kai is an excellent climber and swimmer and have been known to climb mountains and swim deep rivers in search of game. Types of Kai Originally in Jan there were two types of Kai . The shishi-inu-gata which was a stockier,thicker framed dog with a bear type face used more for boar hunting, and the shika-inu-gata which is a thi!
nner longer bodied dog with a foxier face. Two foundation studs were given credit for these looks," Kaikuro" for his bear look and "Dairo" famed for his deer hunting skills. Both dog gave strength,speed ,agility and quick thinking to their descendents which we can still see in the breed today.

*The Kaiken Aigokai do not use the expressions "bear type" and "fox type" anymore but do describe them as the "round face and the long face" in Japan today. They do not distinguish between the two types and neither is preferred over the other. Colors of the Kai

Most Kai puppies are born solid black and brindle as they age. The Kai come in three distinct colors.

The Black Brindle which is a primarily black dog with blackish brown striped patterns on the coat; with more black to brown hair ratio, giving the coat a lustrous glossy black appearance with little or no evidence of the brindle until in a bright light.Some times this pattern can only be seen when the light shines on it.

The Red Brindle has more blackish/ brown hairs than the solid black hairs giving the coat a reddish brown appearance with black striped brindled patterns on it. A Kai's tiger pattern is different than from the brindle pattern of other dogs because its brindle is an actual striped pattern on the coat.* The yellow ,creme or white colored dogs are not pedigreed in Japan. The purpose of the distinct coloring and brindle pattern of the Kai Ken is to enable it to blend in with the surrounding trees and rocky surfaces of the mountains which enabled it to sneak up on its prey and also helped protect it from other predators while hunting in ancient times. The Japanese describe the Kai Ken as a trustworthy guardian and extremely devoted to his master. The Japanese have high respect and admiration for this breed. The Kai was designated a " Natural Treasure" In Japan in 1934 and is protected by law. We have been trusted by the Japanese to care for and protect this breed.As breeders and !
owners we need to make every effort to ensure this breed does not become another puppy mill or shelter statistic.We need to make every effort to breed healthy minds that can survive in our domestic world and sound bodies that will enable our Kai Ken to live happy, long, healthy lives, keeping in mind the natural beauty and remarkable stripping patterns and colors nature intended. *Information from the Kaiken Aigokai Tokyo Chapter established 1931 **All pictures from the Kaiken Aigokai Tokyo Chapter established 1931