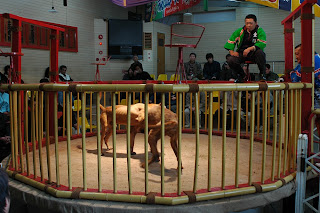 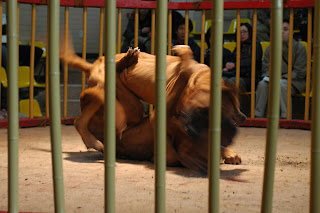 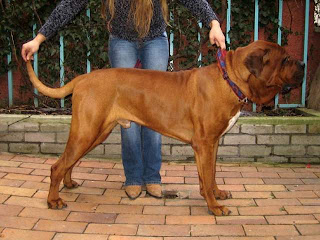 The Tosa (土佐 ?, also called the Tosa Ken) is a breed of dog of Japanese origin that is considered rare. It was originally bred in Tosa (present day Kochi ) as a fighting dog and still is today.

The Tosa varies considerably in size, with the Japanese-bred dogs tending to be about half the size of those bred outside the country. The Japanese breed generally weighs between 80 and 120 lb, while the non-Japanese breeders have focused on dogs that weigh from 130 to 200 lb (89.5 to 100 kg) and stand 24.5 to 32 inches (62 to 82 cm) at the withers.[1] (Citation needed, as many heavyweight Japanese fighting dogs are recorded around 200lb) The coat is characterized by its short and smooth appearance and is often red, brindle, or fawn. Occasionally it can be a dull black, but this is somewhat rare. Maintenance of the coat is usually minimal.

The Tosa has unmatched loyalty to its master and is very good with children and people it knows. They are an intelligent breed that know when there is a threat; are known to attack if there is a threat, and is very protective of other family pets. Generally cannot live with another dog unless they have grown up together or related. The breed favors its "den" (i.e. house, car, and property in a home situation) and "pack" (i.e. human family in a home situation) and is very affectionate to its family. It is poised, but when the occasion demands, eager and alert; both fit and willing to serve in its capacity as a companion, watchdog, guide dog for people who are blind, herding dog, fighter, or guardian, whichever the circumstances may demand.

Proper socialization as a puppy is one of the two key factors which determines what a dog's temperament will be as an adult. Genetics is the other. They go hand-in-hand; there is no guarantee that a dog with poor genetics can be trained to be stable and friendly, and by the same token the best genetics are meaningless if the dog is not well-socialized as a puppy. Ideally, a Tosa should be alert and fearless in defense of its den and pack, but loving and non-aggressive within the home environment and to strangers its master is at ease with. The Tosa is unmatched in strength and pain tolerence but is as clever as it is strong.

Ownership of Tosas is legally restricted in certain jurisdictions. In the United Kingdom ownership is regulated under the Dangerous Dogs Act 1991. A specific exemption of a British court is required to own and import Tosas legally in the UK (see article on the act for details). Some insurance companies will not insure homes with dog breeds deemed dangerous.

The Australian Customs Service prohibits the import of Tosas, along with other dog breeds considered dangerous, into Australia [2].

The Tosa is one of 11 breeds of dog recently banned by the Dublin City Council from their properties, including council houses, flats and estates[3].

The New Zealand government banned the import of Tosas claiming that they are dogs specifically bred for fighting. It was to be a step towards combating the increasing number of dog attacks on humans, especially children.

This breed originated in the second half of the nineteenth century. The breed started from the native Shikoku-Inu, an indigenous dog weighing about 25 kilograms and standing about 55 centimetres high, which closely resembles the European Spitz. These dogs were crossed with European dog breeds, such as the Bulldog in 1872, Mastiff in 1874, St. Bernard, German Pointer in 1876, Great Dane in 1924, and the Bull Terrier[4]. The aim was to breed a larger, more powerful dog. The heyday of Tosa breeding was between 1924 and 1933, when it was said that there were more than 5,000 Tosa breeders in Japan.

In Japan this breed is also called Sumo Dog. Sumo fighters are Japanese wrestlers who engage in a very unusual style of wrestling that is over 1,500 years old. The objective of sumo wrestling is to stay on one's feet despite one's opponent's attacks and not to allow one's opponent to knock one to the floor or drive him from the ring.

This sumo wrestling is also the basis for the traditional Japanese dog. The Tosa is thus a "wrestling dog", and the fights are carried out according to sumo rules. The winner is the dog that presses its opponent to the ground with its body, knocks it off its feet, and holds it to the ground. Growling dogs are disqualified and are banned from further competition. Despite some rumors that they don't bite, Tosa fights do involve biting. The loser often will turn their backs away which results in a loss.

Tosa who were successful in the sumo fight received a valuable, beautifully decorated cloth apron with the crowning touch of an elaborately braided, thick hemp rope. What was demanded was not the wild fighter, the mauler, but the physically strong dog, courage paired with skill, patience and stamina.

Tosas are one of the targets in modern dogfights; this is due to their impressive stamina, powerful bite and agility despite their large size. Their high price, however, prevents them from being used in great numbers in the US, like the American Pit Bull Terrier is.

Tosas fight silently due to Japanese dog fighting rules. They are formidable fighters, thought of as the greatest fighting dog breed in the world. They generally finish off opponents of other breeds very quickly, for two reasons - they are one of the strongest dog breeds in the world and because they tend to get bored if a fight drags on too long. This can sometimes lead to unusual defeats against "game-bred" dogs after the tosa has turned its back, but more often than not a tosa will finish off an opponent when attacked.

* Several Tosa Inu play pivitol roles in the Japanese manga and anime series, Ginga: Nagareboshi Gin and its sequel, Ginga Densetsu Weed. Most notable are a Tosa named Musashi, the middle weight dog-fighting champion of Japan, and a Tosa cross named Benizakura, hailed as the strongest fighting dog in the world.
* In Gokusen, the Kuroda family keeps a Tosa Inu named Fuji. According to the special chapter titled "My name is Kuroda Fuji", each generation of the Kuroda family has a Tosa Inu named Fuji.