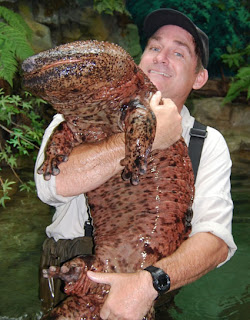 A 105-centimeter-long giant salamander was found walking along a riverside road in Kyoto by a motorist Tuesday and was temporarily taken into protective custody by police. According to police, a man driving his car along the Kamogawa River that flows through the city spotted the salamander at around 5:50 a.m. and dialed the 110 emergency phone number to summon police, who rushed to the scene. The huge aquatic salamander was then brought to a police station in Kita Ward and held there for several hours in a water tub before being released into a branch of the same river. Kyoto University professor Masafumi Matsui told Kyodo News he was concerned to learn that the giant salamander in question, which resembles a hybrid, was released without proper examination and into a different waterway from the main course of the river along which it was found. The Kamogawa River, the amphibian expert explained, has a serious problem with hybridization between Japanese and Chinese giant sala!
manders, and there is concern the problem could spread to other habitats in Japan.

In March, Matsui proposed to relevant authorities that a system be put in place to prevent just what happened Tuesday. Any animals found should be identified by experts prior to release, he said. The Japanese giant salamander, which can reach more than 150 cm in length and weigh over 20 kilograms, is highly protected species in Japan where it is designated as a ''special natural monument.'' The river-dwelling amphibians are entirely aquatic. But on rare occasions they may leave the water to circumvent manmade obstacles built in the river that prevent them from moving upstream, either to breed or after being washed downstream by heavy rain. There have even been cases in which the animals have been hit by cars and killed. Asiatic giant salamanders are the world's largest amphibians. The Japanese species can be found in cool streams and rivers in central and western Honshu, as well as in parts of Kyushu and Shikoku islands, while the slightly larger Chinese species in!
habits central China. A much smaller relative, the hellbender, lives in the eastern United States.