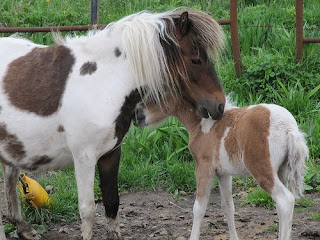 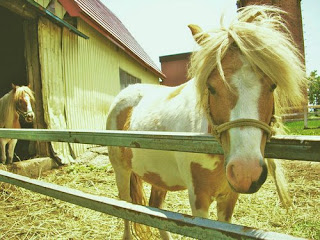 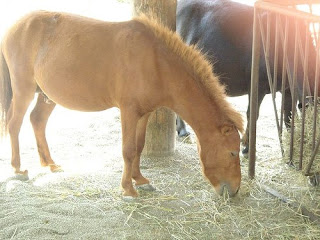 The Hokkaido pony, generally called Do-san-ko as a term of endearment, is an old but rare breed of pony native to Japan.
Contents

The Hokkaido pony is thought to have been brought to Hokkaidō from Honshū by fishermen during the Edo period (1600-1867). The fishermen came to Hokkaido in search of herring and the ponies were used for transportation, but were left in Hokkaido when the fishermen returned home in Autumn. The ponies were expected to survive without assistance in a land with very little vegetation and covered with snow throughout the winter, with the exception of bamboo grass found in the mountains. The fishermen would return in spring with new ponies and would also use the surviving ponies. The enduring strength for which the Hokkaido pony is now known is thought to have been developed in this way.

The Hokkaido pony is considered a descendant of the Nanbu horse, a breed which is thought to have been bred in Tohoku the northern region of Honshū. However, the Nanbu breed no longer exists and there is no definitive information on its history. This is because the Nanbu horse was historically renowned as a military horse and was heavily crossbred during the late 19th century to develop a larger breed suitable for the military. It is thought that the animals brought to Hokkaido by fishermen were considered to be of inferior quality among the Nanbu breed, as the fishermen did not intend to bring them back.

The largest population of this breed is found on the Pacific coast of Hokkaido. They are the most plentiful of the remaining ancient Japanese ponies, numbering at around 2000. Hokkaido ponies are used for heavy transportation in the mountains where trucks and other equipment cannot go. Some ranchers in Hokkaido still winter the horses in the mountains, continuing the breed's hardiness. They feed mainly on bamboo grass and wander around in the mountains in search of it. In spring they return to the ranches without assistance as during this time the bears awaken from hibernation in the mountains and start to prey on the foals.

As in other Japanese breeds, the Hokkaido pony is found in most solid colors, and many are roan. White markings of any kind are rare and not allowed for registration. They stand between 13 and 13.2 hands high (132 to 137 cm). They are very strong for their size and have a willing temperament. They are also used as pleasure mounts or for transportation.