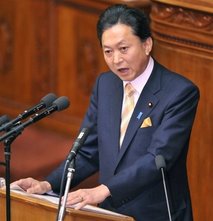 TOKYO (AFP) – Japan's Prime Minister Yukio Hatoyama has revealed he dislikes whale meat, a newspaper reported Saturday, in an unusual confession for the prime minister of a country that defies Western criticism of whaling.
"I hate whale meat," Hatoyama said during a meeting with his visiting Dutch counterpart Jan Peter Balkenende on Monday at the prime minister's office, the Sankei Shimbun reported.
The Netherlands is one of several anti-whaling countries that allows the radical environmental group Sea Shepherd Conservation Society to register a vessel in the country.
The group's activists have repeatedly harassed Japanese whaling vessels in Antarctic waters. During the last hunt a Sea Shepherd vessel collided with a whaling ship, sparking allegations that the group was behaving irresponsibly.
Despite Hatoyama's reported dislike of whale meat, however, he urged Balkenende to take action against the group over its attacks on Japanese whalers in the Antarctic, government officials said.
Japan hunts whales by using a loophole in the 1986 moratorium on commercial whaling that allows "lethal research" on the creatures, but makes no secret of the fact that the meat often ends up on dining tables.
Tokyo often accuses Western critics of insensitivity toward its culture and heritage.
Hatoyama's centre-left government, which took office in October, has deviated little from the pro-whaling policies adopted by the previous administration, which had traditionally close ties with farmers and fishermen.
By Unknown - November 04, 2009