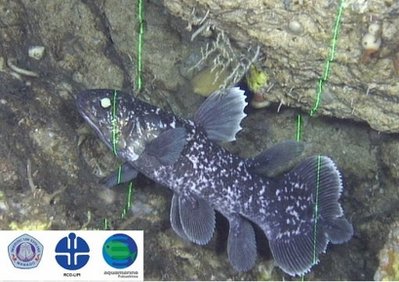 TOKYO (AFP) – Japanese marine researchers said on Tuesday they had found and successfully filmed a young coelacanth -- a rare type of fish known as "a living fossil" -- in deep water off Indonesia.

The creature was found on October 6 at a depth of 161 metres (528 feet) in Manado Bay off Sulawesi Island, where the Indonesian coelacanth was first discovered, according to the researchers.

Video footage showed the 31.5 centimetre (12.6-inch) coelacanth, coloured blue with white spots, swimming slowly among rocks on the seabed for about 20 minutes.

"As far as we know, it was the first ever video image of a living juvenile coelacanth, which is still shrouded in mystery," said Masamitsu Iwata, a researcher at Aquamarine Fukushima in Iwaki, northeast of Tokyo.

Scientists hope the discovery will shed light on the habitat and breeding habits of coelacanths.

The researchers used a remotely operated, self-propelled vehicle to film the coelacanth, which appeared to be newly born, Iwata said.

A similar-sized juvenile was once discovered in the belly of a pregnant coelacanth. It is believed that their eggs hatch inside the female and the young fish are fully formed at the time of birth.

Coelacanths are commonly regarded as having evolved little from prehistoric times and were thought to be extinct until a living specimen was discovered in 1938 off the coast of southern Africa.
By Unknown - November 18, 2009