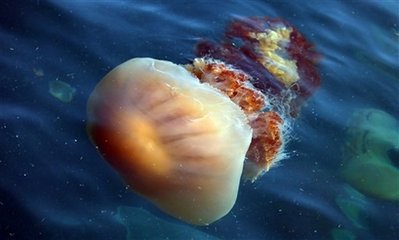 KOKONOGI, Japan – A blood-orange blob the size of a small refrigerator emerged from the dark waters, its venomous tentacles trapped in a fishing net. Within minutes, hundreds more were being hauled up, a pulsating mass crowding out the catch of mackerel and sea bass.

The fishermen leaned into the nets, grunting and grumbling as they tossed the translucent jellyfish back into the bay, giants weighing up to 200 kilograms (450 pounds), marine invaders that are putting the men's livelihoods at risk.

The venom of the Nomura, the world's largest jellyfish, a creature up to 2 meters (6 feet) in diameter, can ruin a whole day's catch by tainting or killing fish stung when ensnared with them in the maze of nets here in northwest Japan's Wakasa Bay.

"Some fishermen have just stopped fishing," said Taiichiro Hamano, 67. "When you pull in the nets and see jellyfish, you get depressed."

This year's jellyfish swarm is one of the worst he has seen, Hamano said. Once considered a rarity occurring every 40 years, they are now an almost annual occurrence along several thousand kilometers (miles) of Japanese coast, and far beyond Japan.

Scientists believe climate change — the warming of oceans — has allowed some of the almost 2,000 jellyfish species to expand their ranges, appear earlier in the year and increase overall numbers, much as warming has helped ticks, bark beetles and other pests to spread to new latitudes.

The gelatinous seaborne creatures are blamed for decimating fishing industries in the Bering and Black seas, forcing the shutdown of seaside power and desalination plants in Japan, the Middle East and Africa, and terrorizing beachgoers worldwide, the U.S. National Science Foundation says.

A 2008 foundation study cited research estimating that people are stung 500,000 times every year — sometimes multiple times — in Chesapeake Bay on the U.S. East Coast, and 20 to 40 die each year in the Philippines from jellyfish stings.

In 2007, a salmon farm in Northern Ireland lost its more than 100,000 fish to an attack by the mauve stinger, a jellyfish normally known for stinging bathers in warm Mediterranean waters. Scientists cite its migration to colder Irish seas as evidence of global warming.

Increasingly polluted waters — off China, for example — boost growth of the microscopic plankton that "jellies" feed upon, while overfishing has eliminated many of the jellyfish's predators and cut down on competitors for plankton feed.

"These increases in jellyfish should be a warning sign that our oceans are stressed and unhealthy," said Lucas Brotz, a University of British Columbia researcher.

Here on the rocky Echizen coast, amid floodlights and the roar of generators, fishermen at Kokonogi's bustling port made quick work of the day's catch — packaging glistening fish and squid in Styrofoam boxes for shipment to market.

In rain jackets and hip waders, they crowded around a visitor to tell how the jellyfish have upended a way of life in which men worked fishing trawlers on the high seas in their younger days and later eased toward retirement by joining one of the cooperatives operating nets set in the bay.

It was a good living, they said, until the jellyfish began inundating the bay in 2002, sometimes numbering 500 million, reducing fish catches by 30 percent and slashing prices by half over concerns about quality.

Two nets in Echizen burst last month during a typhoon because of the sheer weight of the jellyfish, and off the east coast jelly-filled nets capsized a 10-ton trawler as its crew tried to pull them up. The three fishermen were rescued.

"We have been getting rid of jellyfish. But no matter how hard we try, the jellyfish keep coming and coming," said Fumio Oma, whose crew is out of work after their net broke under the weight of thousands of jellyfish. "We need the government's help to get rid of the jellyfish."

The invasions cost the industry up to 30 billion yen ($332 million) a year, and tens of thousands of fishermen have sought government compensation, said scientist Shin-ichi Uye, Japan's leading expert on the problem.

Hearing fishermen's pleas, Uye, who had been studying zooplankton, became obsessed with the little-studied Nomura's jellyfish, scientifically known as Nemopilema nomurai, which at its biggest looks like a giant mushroom trailing dozens of noodle-like tentacles.

"No one knew their life cycle, where they came from, where they reproduced," said Uye, 59. "This jellyfish was like an alien."

He artificially bred Nomura's jellyfish in his Hiroshima University lab, learning about their life cycle, growth rates and feeding habits. He traveled by ferry between China to Japan this year to confirm they were riding currents to Japanese waters.

He concluded China's coastal waters offered a perfect breeding ground: Agricultural and sewage runoff are spurring plankton growth, and fish catches are declining. The waters of the Yellow Sea, meanwhile, have warmed as much as 1.7 degrees C (3 degrees F) over the past quarter-century.

"The jellyfish are becoming more and more dominant," said Uye, as he sliced off samples of dead jellyfish on the deck of an Echizen fishing boat. "Their growth rates are quite amazing."

The slight, bespectacled scientist is unafraid of controversy, having lobbied his government tirelessly to help the fishermen, and angered Chinese colleagues by arguing their government must help solve the problem, comparing it to the effects of acid rain that reaches Japan from China.

"The Chinese people say they will think about this after they get rich, but it might be too late by then," he said.

A U.S. marine scientist, Jennifer Purcell of Western Washington University, has found a correlation between warming and jellyfish on a much larger scale, in at least 11 locations, including the Mediterranean and North seas, and Chesapeake and Narragansett bays.

"It's hard to deny that there is an effect from warming," Purcell said. "There keeps coming up again and again examples of jellyfish populations being high when it's warmer." Some tropical species, on the other hand, appear to decline when water temperatures rise too high.

Even if populations explode, their numbers may be limited in the long term by other factors, including food and currents. In a paper last year, researchers concluded jellyfish numbers in the Bering Sea — which by 2000 were 40 times higher than in 1982 — declined even as temperatures have hit record highs.

"They were still well ahead of their historic averages for that region," said co-author Lorenzo Ciannelli of Oregon State University. "But clearly jellyfish populations are not merely a function of water temperature."

Addressing the surge in jellyfish blooms in most places will require long-term fixes, such as introducing fishing quotas and pollution controls, as well as capping greenhouse gas emissions to control global warming, experts said.

In the short term, governments are left with few options other than warning bathers or bailing out cash-strapped fishermen. In Japan, the government is helping finance the purchase of newly designed nets, a layered system that snares jellyfish with one kind of net, allowing fish through to be caught in another.

Some entrepreneurs, meanwhile, are trying to cash in. One Japanese company is selling giant jellyfish ice cream, and another plans a pickled plum dip with chunks of giant jellyfish. But, though a popular delicacy, jellyfish isn't likely to replace sushi or other fish dishes on Asian menus anytime soon, in view of its time-consuming processing, heavy sodium overload and unappealing image.