Is Bayer responsible for bee deaths?

Email ThisBlogThis!Share to TwitterShare to FacebookShare to Pinterest
Labels: eggs 
BONES OF CONTENTION: Animals and Religion inContemporary Japan, by Barbara R.
Ambros. University of Hawaii Press, 2012, 255 pp., $29 (paperback)
Bumping into a Japanese acquaintance on the street recently, I inquired where he was going on
his day off dressed in a formal business suit. A worker at a major pharmaceutical company, he
explained that he was participating in a ceremony honoring the spirits of all the animals that had
suffered during experiments in their laboratories. A Buddhist priest would be conducting the
rites.
In Barbara R. Ambros’ “Bones of Contention,” the writer includes a similar example of a
restaurant at the foot of a pet cemetery, which holds an annual memorial service for fish, birds
and mammals, in a spirit of gratitude for sentient creatures that are “martyrs for the sake of the
nation’s progress and prosperity.”
Obliged to kill hundreds of thousands of chickens after avian flu struck in 2004, the Japan Poultry
and Egg Farmer Association, we learn, held a large memorial service at the Tokyo Grand Hotel,
the altar bedizened with white lilies and a pyramid of boxed eggs. Such initially startling events
come, through the powerful transformer of Ambros’research, to gradually make perfect sense,
to even be perceived as morally well-grounded actions.
The author illustrates just how embedded animals have become in Japanese life, reflected in the
increasing desire of owners to be interred with their pets. And Buddhist temples, always on the
lookout for new sources of revenue, have welcomed the demand for memorialrites for pets.
The writer’s own entrée into this deathly landscape was more experiential than academic.
Ambros first came across mortuary rituals when her parakeet came down with sudden seizures,
the attacks requiring incubation in a Tokyo clinic and eventually euthanasia. It was there the vet
told her about the possibility of being interred and memorialized in a pet cemetery at a Nichiren temple.


Following the bifurcating paths that hands-on research often presents, the writer gained access
to pet funerals, usually the exclusive preserve of family members, surveyed websites dedicated
to pet loss, joined in online consolation chat rooms relating to propitiatory rites and funerals for
pets, tracked stories in the print media and the content of pet literature, even examining court
documents relating to legal cases connected to pet cemeteries.
Ambros touches on the intriguing subject of metamorphosis, which in Japanese folklore and
mythology often takes the more specific form of zoomorphism, the shape shifting of animals
into humans. Such beliefs may not be confined entirely to the past. One recalls in Alan Booth’s
travelogue, “The Roads to Sata,” the author being warned not to take a forest road at twilight, as
foxes, transformed into alluring women, would likely bewitch him. The book was written in the
1980s.
Ambros questions the propensity of Japanese scholars to lean on oversimplistic dichotomies in
suggesting that they possess a closer relationship with animals than other races, one reflective
of a greater holistic sense of the natural world. The writer easily explodes the notion that the
Japanese live in harmonious coexistence with nature, noting that “Wildlife has been treated both
as a resource to be exploited and as pests and predators to be exterminated and feared.” This
would seem perfectly natural for a people who once hunted deer and boar with dogs, and who
now rank among the world’s more enthusiastic consumers of meat.
Ambros references the idea that attitudes to animals and their care vary regionally in Japan.
There may be something to this. Outsiders who have settled in Okinawa, for example, have
complained to me about the wretched mistreatment of animals there, comparing it to
conditions in China.
Interestingly, such attitudes do not preclude sentimentality about animals. On a recent trip to
Okinawa, I came across two dog statues facing each other across the water between Aka and
Zamami islands. Such was the passion of one dog, he swan each day to a beach on Zamami for a
rendezvous, a distance of some 3 km. This tale of loyalty and affection was even made into a
film. Like many an ambivalently sentimental people, the Japanese, it seems, cannot resist a good animal story.
http://www.japantimes.co.jp/culture/2013/02/10/books/japans-animal-spirits/#.UWr99LXvt8F 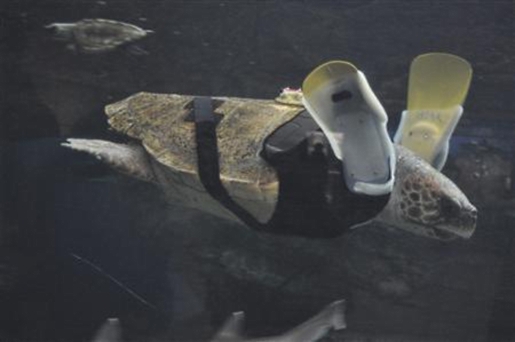 KOBE — A sea turtle that lost her front legs to a shark attack was bidding to match “Blade Runner” Oscar Pistorius on Tuesday, as she donned the latest in artificial flipper technology in Japan. Yu, an approximately 25-year-old female loggerhead turtle, was test-driving her 27th pair of artificial front legs around her home aquarium near Kobe, where she proves a draw for the crowds. The rubber limbs are attached to a vest slipped over her head, said the aquarium’s curator, Naoki Kamezaki. “We have worked hard to design the vest in a way that prevents the turtle from taking it off unwittingly,” he told AFP. “It can flutter the limbs as the vest is soft.” The creature, which weighs 96 kilograms and has a shell 82 centimeters long, was pulled out of a fisherman’s net and sent to the Suma Aqualife Park in mid-2008. One third of the right limb and half of the left limb were gone, in what Kamezaki believes must have been a shark attack. The aquarium started developing artificial limbs for the animal in late 2008 as it could swim only at about 60 percent of its normal speed. Earlier versions were squeezed into the stumps but were apparently painful to Yu. “Similar attempts have been made to attach artificial limbs to turtles around the world. But we have not heard if they went well,” said Kamezaki, an expert on sea turtles, whose surname coincidentally means “turtle cape” in Japanese. “Ours may be the only case in which a turtle with artificial limbs is still swimming without a problem.” In 2004, a dolphin at an aquarium in Okinawa became the first in the world to be fitted with a rubber tail fin. It lost its own tail due to illness. South African sprint king Pistorius, whose legs were amputated below his knees, won plaudits for his performance at last year’s London Olympics where he competed alongside able-bodied athletes.
By Unknown - February 24, 2013 No comments: