Sign Up For the Japan-Domains.com Newsletter! Everything You Need For Your Internet Business or Blog 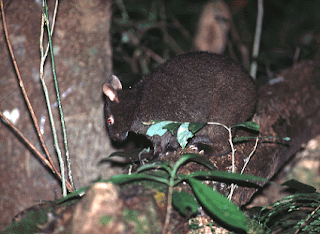 Classified as endangered, the Amami rabbit is protected as a Japanese 'natural monument'. But this ancient mammalian lineage and the natural forests that it inhabits are not merely unique Japanese legacies, symbolic of the significant biodiversity of the central Ryukyu Islands - they are of global significance.
First described by American scientists WH Furness and HM Miller in 1896, the Amami black rabbit was named and reported as Pentelagus furnessi in 1900 by W Stone. It measures 40-50cm in length, weighs up to 2kg and has a thick, woolly coat that is dark brown or blackish. It is so different from other rabbits and hares of the family Leporidae that it is considered to belong to an early branch off the main rabbit-hare evolutionary tree. Its small ears and eyes have generally been viewed as ancient characteristics, and though placed in its own endemic genus, it has often been lumped for convenience in the same group or subfamily as that other anomalous rabbit, the volcano rabbit Romerolagus diazi of Mexico.

In the genes
Exciting new genetic research has shown that the Ryukyu spiny rat of Amami, Tokuno and Okinawa should be re-assigned to three separate species, as the populations on each of the islands has diverged so much from the others - the population on Okinawa even has twice as many chromosomes as that on Amami. Similar research on the mitochondrial DNA (the energy producing units within cells) of the Amami black rabbit has shed light on its long-disputed evolutionary history, revealing that its lineage has been as independent as any other of the Leporid genera. The Amami rabbit's ancestors diverged early on from the main Leporid branch, between 10 or 20 million years ago, about half as long ago as the pikas and the ancestral rabbits separated. In other words, the Amami rabbit has been isolated for so long from other rabbits and hares, including the volcano rabbit, that they are scarcely kin.

New dangers
The unique mammals of Okinawa and the Ryukyu Islands have co-evolved with the poisonous habu pit viper, but not with predatory mammals. Rats accompanied human settlers to the islands, and as agriculture has spread, so too have the rats, providing increased food for the habu pit viper, which apparently increased in response. To control the snakes, locals introduced mongooses to the islands about 20 years ago, but it seems they do not bother to eat the snakes, feeding on the spiny rat and Amami rabbits instead. This failed biological control is now threatening the integrity of the natural forest ecosystem, though not as drastically as clear-felling the forests, which has been undertaken at an astonishing rate over the same time frame.

On a sadder note.
The Yomiuri Shimbun
KAGOSHIMA--Eleven dead rabbits of an endangered species designated as a special natural treasure were found Monday scattered at intervals along the shoulder of a woodland road in Amami-Oshima island in Kagoshima Prefecture.
Never before have so many bodies of Amami rabbits been found at once, according to the Amami Municipal Board of Education and other sources.
Amami rabbits can only be found on Amami-Oshima and Tokunoshima islands in the Okinawa prefecture and are designated in the Environment Ministry's Red Data Book as a species under threat of extinction.
A person mowing grass Monday morning around the path on the border of Amami and Setouchicho found the bodies interspersed at distances of between 500 meters and one kilometer along a seven-kilometer stretch of the path. Three of the bodies had been reduced to skeletons, according to the board.
No bodies were found when the grass was previously cut Friday and most of the rabbits are believed to have died between Friday and Monday.
A center for the conservation of wildlife in Amami under the jurisdiction of the ministry was dissecting the rabbits to find the cause of death.
Dozens of cases of Amami rabbits being hit by cars are reported every year, with some also eaten by feral dogs. But no major external wounds could be seen on the eight bodies yet to decompose.
"I think there are too few external wounds for the [rabbits] to have been hit by cars," a board official said. "They may have died from an infectious disease or something."
Amami rabbits grow to about 40 or 50 centimeters in length and are notable for their short ears and legs.
About 4,400 were estimated to be living on Amami-Oshima around the early 1990s, but their natural habitat has been disappearing due to forest exploitation and the introduction of alien species, and their numbers are believed to have dropped in recent years. 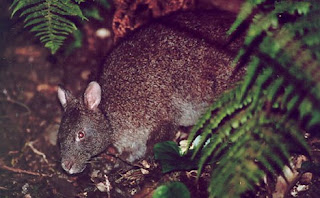 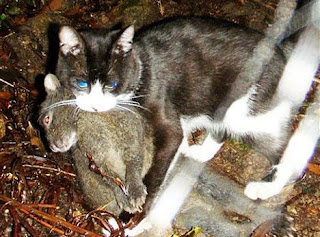 The Amami rabbit — a threatened species found only in the Ryūkyū Islands — may become Japan's first endangered animal clone. Scientists at Osaka's Kinki University have cloned an embryo of the endangered rabbit and are awaiting its birth next month, it was announced earlier this week.

The Amami rabbit (Pentalagus furnessi) is a nocturnal, forest-dwelling "primitive" rabbit with dark fur, short legs, large curved claws and small ears. Found only on the islands of Amami-Ōshima and Toku-no-Shima, it is sometimes called a "living fossil" for its resemblance to ancient rabbits that once inhabited the Asian mainland. The Amami rabbit's dwindling population — now estimated at between 2,000 and 5,000 — has earned it a spot on Japan's endangered species list.

To produce the clone, researchers took a cell from the ear of a dead Amami rabbit and injected it into the unfertilized egg of an ordinary lab rabbit. After the egg developed into the cloned embryo, researchers inserted it into the oviduct of a lab rabbit surrogate. The clone will be born in the coming weeks if the pregnancy comes to term. The chances of success are slim, though, as cloning pregnancies typically have a high failure rate. However, the scientists are prepared to repeat the process until a clone is born.

Although some people see cloning as a promising tool for restoring endangered populations when natural breeding is not possible, others argue it is more important to address the actual causes of the population decline. Deforestation and road accidents are major reason for the Amami rabbit's decline, as is the predatory mongoose, which humans released on the islands to control the snake population.

Pet dogs and cats also pose a danger to the species. In June, motion-sensitive cameras set up to monitor Amami rabbit activity on the island of Amami-Ōshima captured the image of a feral domestic cat dragging a freshly killed carcass through the forest.

If the experiment succeeds, the Amami rabbit will join a growing list of endangered animals that have been cloned. Previous examples include the Asian gaur (a rare ox native to India and Burma), which died two days after it was born in the US in 2001, as well as the European mouflon (a Mediterranean wild sheep) and the Junqueira cow (Brazil).

Regardless of the outcome, the researchers suggest a degree of caution. Although cloning may potentially be used to preserve rare species, little is known about the long-term environmental impact, they said. 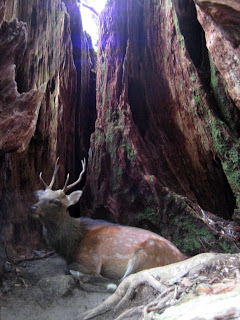