Vaccination of all cows and pigs within 10 km of farms hit by foot-and-mouth disease in Miyazaki Prefecture was expected to be finished by the end of Tuesday before they are slaughtered, agriculture minister Hirotaka Akamatsu said.

Akamatsu said 73 percent of some 200,000 cows and pigs set to be slaughtered had been vaccinated as of Monday night.
"The remainder is some 30,000, so I believe vaccinations will be finished by the end of today," Akamatsu said.
Slaughtering the cows and pigs will be carried out quickly because people who were involved in the vaccinations will be able to help, Akamatsu said.
Touching on a request by Miyazaki Gov. Hideo Higashikokubaru that 49 seed bulls in the prefecture be kept alive, Akamatsu repeated the ministry's stance that they should be destroyed to prevent the spread of the disease.
The Liberal Democratic Party is stepping up criticism against Akamatsu, saying he failed to contain the disease at an early stage.
The party is also trying to legislate its own steps to fully compensate affected cattle farmers, including the government's purchase of the land where destroyed animals will be buried.
"How could cattle farmers start over again on the land where dead animals are buried?" LDP Lower House lawmaker Taku Eto, who hails from the Miyazaki No. 2 district, asked a Diet panel. "It will take at least 10 years before the dump sites can be used again."
By Unknown - May 26, 2010 1 comment: Male thunderbird, originally uploaded by digicacy.
By Unknown - May 20, 2010 1 comment: Siberian Weasel, originally uploaded by coniferconifer.
By Unknown - May 20, 2010 No comments:

"Every winner has scars. " 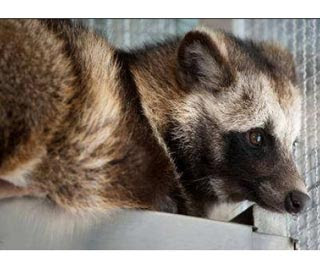 SINGAPORE: The Singapore Zoo in Mandai recently welcomed a pair of special guests from Japan.
Racoon dogs Pom and Poko are the first animals here under an exchange programme between Wildlife Reserves Singapore and Asahiyama Zoo in Hokkaido.
Known as 'tanuki' in Japanese, these animals are native to East Asia and are popularly portrayed as happy-go-lucky tricksters in Japanese folklore.
In tanuki folklore, "ponpoko" is said to be the sound a tanuki makes when it drums its own belly.
Pom and Poko are in quarantine right now, and visitors will get to see them in a permanent exhibit at the upcoming River Safari, set to open in early 2012.
By Unknown - May 11, 2010 1 comment:

Watson, speaking in New York, said "the arrest warrant is just totally political, it's nothing. I'm not concerned, and Interpol is not going to extradite me on a politically motivated charge."

"We save whales, and we are going to continue to go down to the southern ocean," the 59-year-old environmental campaigner and captain of the group's Steve Irwin vessel told reporters in comments broadcast in Japan.

The reported arrest warrant and Interpol request, which the Japan Coast Guard declined to confirm, are the latest act in a long-running battle between Japan and the US-based Sea Shepherd Conservation Society.

Japan hunts whales under a loophole to an international moratorium that allows the killing of the sea mammals for scientific research and does not hide the fact that the meat is later sold in shops and restaurants.

Sea Shepherd has sought to obstruct Japan's whalers for years and this year said they had their most successful season yet by preventing the harpoon ships from killing hundreds of the ocean giants.

Japan's Fisheries Minister Hirotaka Akamatsu said "Japan should take decisive action. We should not leave such cases hanging in the air. Regardless of whether they are pro- or anti-whaling, what they did was a crime."

In one of the clashes, the Sea Shepherd's futuristic powerboat the Ady Gil, carrying six crew, was sliced in two in a collision with the whaling fleet's security ship the Shonan Maru II in January. It later sank.

The Ady Gil's captain Peter Bethune, 45, subsequently boarded the Shonan Maru II from a jet ski with the stated intent of making a citizen's arrest of its captain for attempted murder and to present him with a bill for the boat.

Bethune, a New Zealander, was detained and is now under arrest awaiting trial for trespass, causing injury, vandalism, carrying a knife and obstructing commercial activities. If convicted who could face up to 15 years jail.
By Unknown - May 01, 2010 2 comments: